These days, no Instagram post or fashion show is complete without a liberal sprinkling of glitter. But questions surround its environmental impact – and role in child slavery. Is it time to stop?

ast year was the best of times and the worst of times for glitter. New York magazine’s fashion title, the Cut, declared: “In 2017, there’s no such thing as too much twinkle.” The managers of one London pub agreed, adding glitter to its Christmas dinner gravy and declaring it the “perfect way to spread festive cheer”. Teen Vogue gave tips on how to be the “new extra-glittery you” for New Year’s Eve, from transforming your hair with sparkly roots to “disco ball” eyelids. At London fashion week, designer Ashish Gupta sent one model down the catwalk in a top that read: “More glitter, less Twitter,” a pointed jab at Donald Trump.

In the digital realm, a glitter tongue trend swept Instagram sparking concerns about people swallowing it, while artist Sara Shakeel went viral for Photoshop collages in which she embellished stretch marks with glitter. An app called Kirakira+, which makes Instagram posts look like the insides of snow globes, became a vital accessory for the fashion set, from makeup artist Pat McGrath to model Bella Hadid. It was glitter’s year for letting its hair down.

But it hasn’t been all fun and ’grams. A woman in Swansea was nearly blinded by a Christmas card when a piece of glitter worked its way into her eyeball. There was a loud backlash to something called Passion Dust Intimacy Capsules, designed to fill one’s vagina with “magicum”, according to the company behind them. “Don’t glitter-bomb your vagina,” warned the gynaecologist Jen Gunter.

For some, glitter never had much going for it – comedian Demetri Martin summed it up perfectly a few years ago when he called glitter the “herpes of the craft world”. Its lingering quality has enabled forensic scientists to use it as evidence and made it popular with activists such as LGBT campaigner Nick Espinosa, who in 2011 poured it over US politician Newt Gingrich with the words: “Feel the rainbow, Newt!”

Recently, however, glitter has caught most flak for being environmentally unfriendly. Concerns about plastic pollution in our seas led one group of nurseries in the south of England to prohibit the use of glitter by 2,500 children before Christmas, while others, such as the New Zealand-based social scientist Dr Trisia Farrelly, called for a ban on plastic glitter altogether.

With most glitter being made from etched aluminium bonded to polyethylene terephthalate (PET), it is a form of microplastic, which can find its way into our oceans and the creatures that call them home. While “there is currently no evidence specifically on glitter being bad for the environment”, according to Alice Horton, a research associate at the UK’s Centre for Ecology and Hydrology, “it is likely that studies on glitter would show similar results to those on other microplastics”. 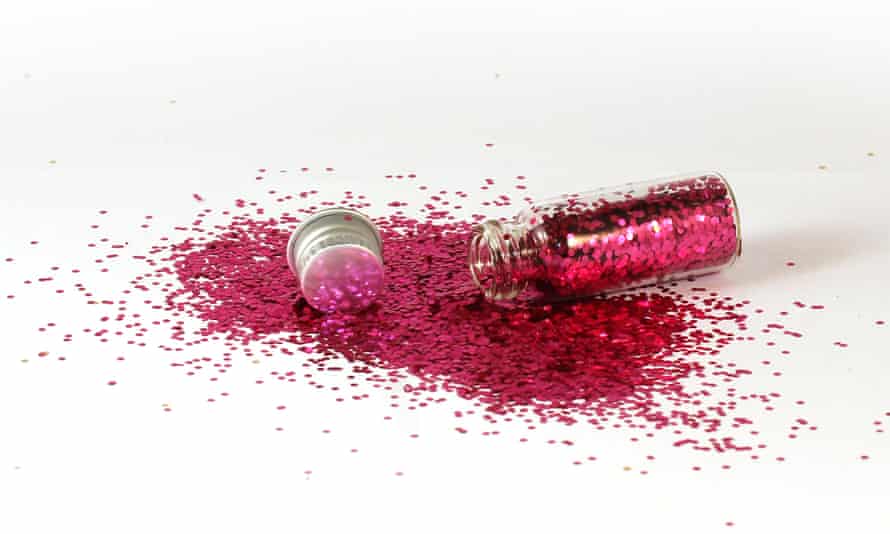 Earlier this month, the UK outlawed microbeads in makeup and personal care products, including the type of glitter used in some rinse-off cosmetics. A similar ban in the US in 2015 applied only to exfoliants. But surely even the UK ban leaves a lot of sparkle that could find its way into the sea (and our scampi)? For Dr Richard Thompson, a marine biologist at the University of Plymouth who led a research project in 2016 that found microplastic in a third of UK-caught fish, when it comes to glitter, there’s cause for “concern rather than alarm”.

While it is important to reduce any emissions of plastic into our environment, he says, “it’s about getting these things in perspective”. Glitter probably represents only a tiny proportion of the plastic waste entering our environment compared with, say, the amount of food and drink packaging left on beaches.

“If it’s being used in a rinse-off product, then you think: why does it need to be there?” Thompson says. “If it’s being glued on to a greeting card, I’m less worried about it.” That your glittery Christmas card is causing no immediate risk to mackerel won’t make the task of hoovering its flecks out of your carpet more fun, but it is something.

Noemi Lamanna uses glitter every day and she is worried about it. “Finding out that glitter, something that we absolutely love and own tons of, was plastic, was heartbreaking,” she recalls. She became a glitter activist, telling anyone who would listen about its dirty little secret. Then, about a year ago, she and her best friend set up a company called Eco Glitter Fun. “We started trading in April,” she says, “and the interest in our glitter has grown exponentially.”

Stephen Cotton is the chemical engineer who helped create Bio-glitter, the more environmentally friendly alternative sold by Lamanna. Does he like the stuff? “It’s OK,” he says. His product, he says, replaces PET with cellulose that comes from tree or plant matter, mainly eucalyptus. It is, he promises, just as sparkly as normal glitter.

Mica is another material that has been touted as an alternative to plastic-based glitter, at least in some applications. A naturally occurring mineral, its tiny particles give a pearlescent shimmer next to glitter’s more brazen shine, making it ideal for use in makeup. But the road to sparkle never did run smooth – the main source of the world’s mica is from illegal mines in India, in which at least 20,000 children are believed to be working. Enter synthetic mica, also known as synthetic fluorophlogopite, which the high street cosmetics chain Lush started using after realising the issues with natural mica. As of 1 January, all its products have been natural-mica-free.

But lab-grown mica is not a solution that Jakub Sobik, a spokesman for Anti-Slavery International, hopes all the corporate giants take up. “Not all mica companies are involved in exploiting children. People’s livelihoods depend on it as well. So you would like to see conditions improve rather than the whole industry shut down.”

Aysel Sabahoglu, a child rights officer at the relief agency Terre des Hommes (TDH), can point to a few improvements in the natural mica industry since a series of media reports were published on the situation – from the Responsible Mica Initiative, signed by about 40 companies from L’Oréal to Chanel, to the “child-friendly villages” on which TDH is working. The idea is that children will “know their rights and know how to fight for them”. If the supply chain can be cleaned up, maybe natural mica’s day will come?

Maybe the appeal of glitter will fade. But it doesn’t seem likely, considering that our love of sparkle dates back to the time of Cleopatra. According to a group of Belgian scientists, who in 2014 looked to evolution for clues to explain our attraction to glossy things, it speaks to something innate in us – our attraction to water. Our ancestors in the Palaeolithic period used mica flakes in their cave paintings, while Neanderthal makeup has been discovered that contains flecks of a reflective, black mineral. As Lamanna says: “Put glitter on it, it’s better. It shines all day.”

We have 102 guests and no members online